With pleasure we teamed up with Dreamcast.es and can offer free floppy disks with Sqrxz and Sqrxz 2 at RetroMadrid (limited supply, so be fast!). RetroMadrid is hold this weekend and will be the first chance for Spanish Amiga-Fans to get a physical version – the game is free, certainly we will not mind if you donate a bit so we can cover our production costs.

Get the game at the Commodore 4 Ever booth now! 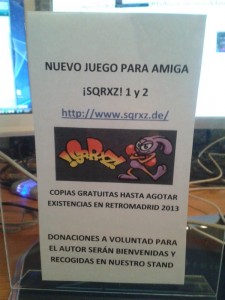 Sqrxz 1 Amiga OCS won the first place, and Sqrxz 2 Amiga OCS the second place in the Amiga68k category at the Amiga Games Award 2012. Thanks to everyone! We will make sure to recode Sqrxz 3 for Amiga OCS too sometime this year!

Hipoonios gave Sqrxz 2 on Amiga Classic a go and here is his Longplay-Video. The game plays like butter, doesn’t it? :)

We divided 50 floppy disks of Sqrxz 2 amongst the visitors and 17 floppy disks of Sqrxz 1, which makes a total of 67 floppy disks. Our Retroguru table with an Amiga 500 (provided by Mark!) allowed everyone to test the game live. Most people failed within the first three screens, but this was to be expected. Interestingly a very young girl managed to play past the half of the first level, which was hardly achieved by any other player.

Next possibility to catch a real floppy disk with the game is tUM 2012.

Feedback and donations are welcome anytime :) Please kindly understand that it’s not possible for us to send out the game on floppy disk via snail mail. It just eats too much money and time.

Release of Sqrxz 2 Amiga OCS @ 4. Retrobörse in Vienna – 8. December 2012! Game will be presented live on an Amiga 500 and free floppies will be given away to visitors. We only come with a limited supply of floppy disks!

Thanks to Yannick Erb we have Sqrxz 2 ported for AROS. Thanks to Nikolaos and Bobo for pre-testing the binaries!

Head over to the download section for the file!

There is a first part of Sqrxz, you may have missed it? If so, check it out!

Thanks to Frank, we have ports for Amiga OS4 and MorphOS ready!

We have new Sqrxz 2 builds!

Sqrxz 2 is now available for Windows and Ubuntu!

Also the official game trailer is available! Thanks to Simon for this! You can watch the trailer by visiting the “About” page.